When the kids were little, I used to bake bread. A lot of bread. I made bread for 2 and 3 families at a time sometimes. I loved baking bread.

I didn’t grow up knowing how to bake bread. There was no Internet either, of course, so I would borrow books from the library or, when I had money, I would buy some books on how to bake it.

The very best bread book I ever got was Laurel’s Kitchen Bread Book.

I used Laurel’s book so much, it became Scratch-n-Sniff from all the food I spilled on the pages. (My La Leche League Whole Foods for the Whole Family was like that, as well.)

I read and read before ever trying that first loaf. I’m sure I almost memorized the Basic Recipe by the time I poured the first packet of yeast into the bowl of warm water. After a few months, I never had to look at the recipe again; I could feel the different amounts and measurements.

It’s been 30 years since I’ve baked a loaf of bread, yet I can still smell the scent of yeast as it was mixed with the warm water. I tried lots of different sweeteners to “feed” the yeast… sugar, honey… but settled on dark molasses.

When I learned yeast was a living being, it changed how I saw raw dough. I began treating the dough with more purpose and attention. I respected the yeast more, hence also the dough. 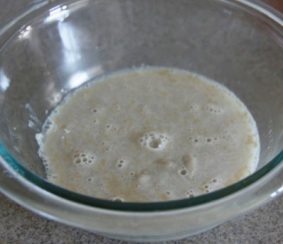 I didn’t know anything about Mindfulness back in the 80’s, but if there ever was a mindful meditative state, it is when kneading huge blobs of dough.

I learned that adding flour (I always used whole wheat flour, spring wheat if possible), even to the counter so the dough didn’t stick, wasn’t the best idea, that dough stops being sticky after kneading until you feel like your hands are going to fall off. Then you knead that long once again.

Before learning to respect the dough, I plopped it into any ol’ bowl, even plastic ones. Forgive me! I didn’t know any better! Once I learned more and shifted my attention, I bought 2 enormous glass bowls, specifically for rising dough. Learning to cover the dough with plastic wrap was an epiphany, but I also got myself 2 white cotton dish towels to protect the dough as it rose. I didn’t realize it, but I’d developed a Bread Baking Ritual.

I always had to set some dough aside for the kidlets, so they could knead at the dining room table. I’d sprinkle flour over much of the table and the kids would be busy for an hour, creating their dough shapes, letting them rise and then waiting to eat them after they came out of the oven. Oh, how I wish I had pictures of those times. I can see it clear as day in my mind, though. It’ll have to reside there forever.

When it was time to “punch” the dough down after it rose the first time, I did just that… punch… finding it amusing to watch the dough curl around my fist. After my this-stuff-is-alive realization, I began being gentle pushing the dough down again. I would use my hand like a spatula and slide against the side of the bowl, watching the (gluten) threads stretch then snap back to the mother-dough. 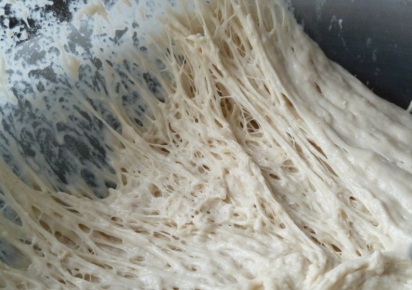 I nudged the dough down before folding it neatly, then covering it with plastic wrap again and placing the white cotton dish towels on top, allowing it to rise (in half the time as the first rise!) once again.

After the second rise, I hand-spatula’d the dough down once again before separating it with a plastic scraper into the proper sizes for the bread pans. Over the years, I tried a variety of ways to keep the baked bread from sticking to the pan: oil (yuck), Crisco (not bad), but finally settled on Pam spray. I curled the raw dough into the bread pans, covered them with plastic wrap and the dish towels yet again, allowing them their last rise.

I wanted slashes in the top of my bread. It took at least 100 times before I didn’t deflate my dough trying to get a lovely slash in the top. I tried sharp knives, serrated knives, forks… even razor blades… and always struggled with that part of baking. Eventually, I learned to zip the knife through fast, not slow and deep. Just pull the knife quickly. Poking around for pics, I see there are now dozens of tools to make beautiful scores in your bread. But back in the olden days….

It was when I began baking bread that I realized I had an interesting cook’s gift; I can tell when baked goods are finished cooking with my nose. I need no timers, there is a distinct scent that wafts around the house and I’m able to get the bread or brownies or pie out of the oven before any burning occurs and without any under-baking.

Out of the Oven

There is no smell so heavenly as fresh baked bread right out of the oven. 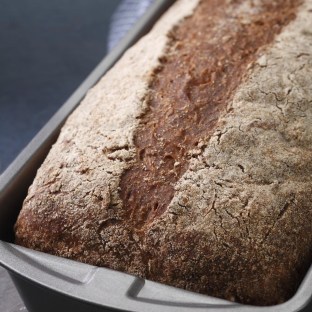 It was a red-letter day the first time I tumped a loaf out of its cooking pan without it falling apart. Once the loaves were out, I put them on cookie racks to cool.

As with the slashes, I had to learn how to cut the bread. This was a shorter learning curve, quickly passing on the dinner knife and non-serrated knife. A sharp serrated knife is definitely the way to save your loaf from looking like crumbs. If you have the capability to let the bread cool even just a few minutes, it won’t fall apart as easily as right out of the oven bread.

And then the butter. Ahhhhh, butter. Not margarine… ever! The fresher the butter the better. Slathering it on, watching it melt into puddles on the bumpy surface, air bubbles holding the creamy sweetness aloft, just waiting for your first luscious bite.

Besides the Basic Whole Wheat Bread I made every day for years, I experimented with other types, rarely finding success.

I could not ever ever ever get Sourdough Bread right. I tried a dozen “full-proof” recipes, believed the promises that grandma’s 100-year old starter would be The One to give me a lovely loaf of sourdough bread. Nope. It never happened. It was worse trying to make starter myself! It reminded me of how I could never keep a plant alive… cultivating living things just was not one of my fortes.

In Laurel’s Bread Book, she waxes poetic about Desem (Day-zum) Bread. It is a massively complicated process that includes burying your small starter loaf in a 50-pound bag of whole wheat flour for a few weeks, taking it out for air every few days, taking away some of the dough, replacing it with new flour… on and on. And on. (I have not looked at the recipe in 30 years so I could be telling you something totally false, but this is how it was for me trying to make the Desem Bread.) How I thought I could make Desem when I couldn’t even keep sourdough starter alive was beyond me. But I tried. More than once. Failed every single time.

Where I did find success was in Laurel’s Banana Bread recipe. I started with hers, but quickly altered it to my tastes. For real, you need 6-8 ripe (not over-ripe!) bananas (“the bread will only taste as good as the ingredients”… great life lesson right there.) to make this 85-pound loaf of bread. 6-8. In each loaf. Not kidding.

I usually made 2 loaves; one with raisins and one with nuts. I like raisins, Zack liked the nuts. You can put cranberries in there… cran-raisins, chunks of chocolate, cherries… anything your banana heart desires.

The scent of banana bread in the oven is exquisite. (I could smell when it was done as well. No timers for me!) Eating hot banana bread with gobs of butter… I’m nearly weeping remembering the taste.

All of my kids have made bread. I like to believe I had something to do with offering fearlessness when trying those first few times.

Technology has given us bread makers, but I know I would not use one because of the hypnotic deliciousness of kneading the dough, watching it rise, punching it down, watching the second rise, then into the pans for their third rise… all before baking.

Looking from this vantage point, there is something special about the length of time it takes from yeast proofing to butter on hot bread. Lessons in patience, small attentions and watching the making of a staple of life humbles me.

Hmmm… didn’t know I would say so much! Hope the kids enjoy this. 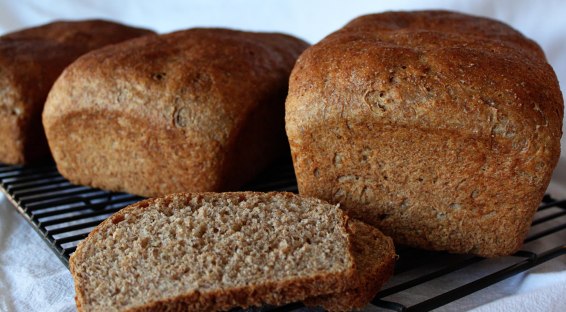