So we are 52 days since George Floyd’s murder in plain view.

Protests began the day after his murder and have continued since. The protests are against systemic police brutality against black and brown people, with Black Lives Matter being the major focus of the gatherings and anger. Blessedly, finally, it is not just blacks protesting, but people of all races and colors have joined in around the world. I have been buoyed by the white faces I have seen standing next to our black and brown sisters and brothers.

As the protests, mostly peaceful, have continued, our President seems to have hijacked them to promote intimidation in the name of “strength.”

Starting with gassing and shoving peaceful protesters on June 1, 2020…

Trump is set to deliver a speech in minutes like two blocks away from here pic.twitter.com/NrtzTqJhz9

…so he could walk across the street to hold up a Bible (upside down) for a photo-op. 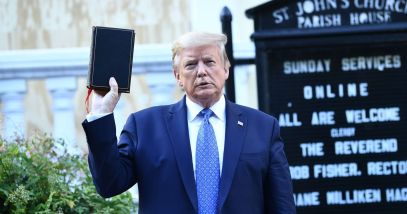 Because of the incredibly unethical and vile desires of our President to create disharmony any place he can think of, he has sent “Federal Officers” into Portland, Oregon.

These Trump thugs are unnamed, unmarked and masked so no one’s face can be recognized. The “officers” are pulling random protesters off the street and putting them in unmarked vans, driving them to unknown buildings where, without any semblance of human rights or dignity, they are being interrogated. Many of whom were not even arrested! Just taken off the street as if we were living in a country led by a mad man.

Oh, but we are in a country led by a madman.

So when I read:

“From Black lives to ‘white spectacle,’ Portland protests have lost focus, civil rights leaders say: ‘The focus has been moved from where it is supposed to be and made to be a spectacle, a debacle,’ said the president of the Portland NAACP.”

“Black community leaders are urging local protesters to shift the focus of demonstrations back to the Black Lives Matter movement and away from what has become a largely ‘white spectacle.’”

…I was baffled how someone could argue in this moment about where the focus should be going. Isn’t this a Put Out The Biggest Fire First situation?

Don’t the two “causes” intermingle? Aren’t the walls there to protect the Black Lives Matter protesters from being attacked?

Portland has a mere 6% Black population. That so many non-Black folks are out to protect their Black citizens, I find, spectacular.

Of course, I am writing from my white perspective, which might discount everything I say here, but when our country is being attacked from within, shouldn’t everyone be standing and fighting regardless of color?

Am I missing something?

Wouldn’t getting rid of the Federal Officers allow the Black Lives Matter message to resonate louder than ever?

In the same article mentioned above comes this commentary:

“Reginald Richardson Jr., pastor of Your Bible Speaks Seventh Day Adventist Church who describes himself as ‘nonviolent,’ encourages white allies to act as shields for Black people, who have a historically fraught relationship with law enforcement.

This is my thought exactly.