The US Army Sends Us Packing

The kids’ dad and I moved to Tacoma with an Army transfer. We were at the bottom rung of the pay scale. Poor. Poorer than poor. Tristan was 16 months old and I was several months pregnant with Meghann. It was a wrangle to get a lease on a house, but we did it.

(I swear the house did not look like this when we rented it. This is the new & improved exterior.)

Our Household goods were super-slow getting to us, so we were given a few things to tide us over… one of which was a crib mattress for me to lay on. Tristan slept in the playpen and the kids’ dad slept in a sleeping bag (if I recall correctly).

One middle of the night, I heard something skittering above me, in the attic. Humorously, my former husband put his boots on (and nothing else) and grabbed a trenching tool and stomped around looking for the noisemakers. He didn’t find anything, but I laid there listening to the scratching far after he fell back to sleep.

When our household goods still hadn’t arrived a month later, the Army bought us a bed. A waterbed. How time-warp is that?!? We had those rainbow sheets on it.

We also had satin hearts in a swirly mobile hanging over the bed.

I had Meghann at home, in an Unassisted Birth (called a UC or “freebirth”)… the stupidest thing I have ever done in my entire life.

Relevant to this story, however, is my never-ending time breastfeeding.

I’d nursed Tristan for a mere 4 months and had big expectations to nurse until Meghann weaned herself (which she sort of did at 2.5 years old). So I was a nursing zombie. I was so tired, but then we got our tv and (we had to have gotten) cable because voila! there was MTV.

Meghann was born May 27, 1984. MTV had been around since 1981, but it was really in its heyday during the time I was watching it in the middle of the night, baby at my breast. In fact, the first Top 20 Video Countdown began in March 1984 (and it SUCKED! Watch it on YouTube!), so right before Meggie was born.

The songs that stood out most for me, the ones I waited for with baited breath:

Cyndi Lauper – Girls Just Want to Have Fun – (WOW! The people in it are incredibly diverse for that time period. I never noticed before.) Tristan loved this video, especially the part where the girls are floating in the bubbles/circles and going around. I can see him as if it was yesterday, in his footie pajamas, dancing and pointing at the TV.

Because Thriller was so so long, it came on rarely. I would nap with one eye open so I could catch it. The dancing still is amazing, even 30 years later.

While Holiday was Madonna’s first hit, her first video hit was Lucky Star. From the first moment I saw her, I was enamored. She came out with a string of hits in 1984, but when Meghann was a newborn, Borderline was the video I salivated for. (Clearly, I know wayyyy too much about Madonna’s early career!) 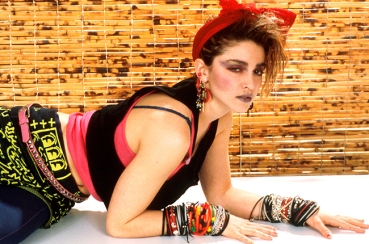 We’d inherited a sofa bed from the kids’ dad’s parents, a little larger than a loveseat, with two big square pillows to sit on. I’ve scoured my thousands of pictures and the Net looking for the sofa. This is the best I could find. 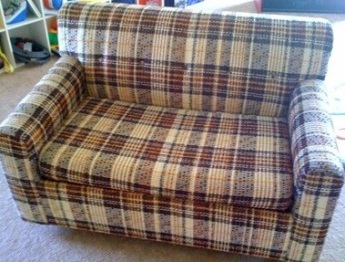 Here is how the sofa opened into a bed.

I sat on the couch on the right side. Every time. Before Meghann was born. And after she was born. That was my spot. I plopped a feather pillow with the rainbow pillowcase under my right arm, holding up my elbow, and I would nurse for hours. Sitting on that right side of the couch.

At night, we just sat nursing by the light of MTV. We kept the volume low for her dad who had to work the next morning, but we still bee-bopped to whomever MTV put on in the wee hours.

One dark early morning, I was nursing on the right side of the couch and out from behind the huge square furnace we had in the living room, came a rat. Then another rat. Then 3 baby rats.

I screamed bloody murder and the kids’ dad ran out, scaring them so they skittered back from whence they came.

How to Kill a Rat

When the Landlord finally came over, he gave us some mouse traps and rat food. He walked around showing us where they were getting in. One place was behind the toilet which freaked me out every time I had to use the bathroom. Picture fat pregnant me with my legs raised while I did my business. Ugh.

The landlord gave us the perfect solution to keeping the rats out.

Crush some glass and sprinkle it where the holes are. 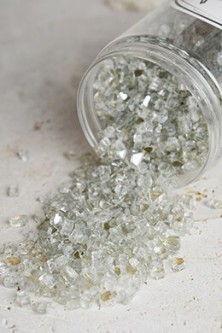 I stood there blinking.

“Uh, I have a toddler! I cannot have crushed glass around the house.”

We checked the traps and poison a few days later and the bait had all been taken, the poison eaten… and the rats twice their size and twice as active.

We had to move.

By the time a solution appeared, Meghann was 4 months old.

Some friends of the kids’ dad were managers at an apartment complex and said they had a place we could move into. The challenge was we did not have the deposit, so they said they had not cleaned it yet and if we were willing to clean it ourselves, it was ours.

We headed over right away to go clean, taking some more friends from the military. When we opened the door, ghastly smells wrapped around us; cigarette stench was the main foulness, but there were others we could not parse out.

The walls in the living room were vile. Drips of nicotine painted them. 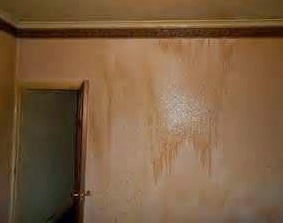 Where the previous tenants removed photos, we could see what the once pristine white walls had looked like. 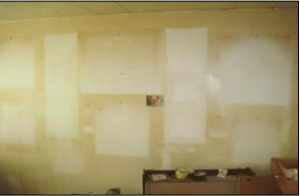 Looking at the white areas, we saw we really had our work cut out for us.

We set to cleaning.

Being fat and not able to climb, I chose the kitchen. Kitchen HELL I should say. Not only were there nicotine streaks, the people before us cooked with grease. A lot of grease. A lot of spattering grease. Within 5 feet of the stove, the grease and yellow cigarette goop challenged each other for dripping space.

The only way I could think of cleaning this disgusting mess was with SOS Pads. Steel wool with soap on them if you aren’t familiar. I set to wetting the SOS pad, then  scrubbing the wall, that blessedly, had glossy paint. Small favors.

I was cleaning madly (literally, not very happily doing this hard work) and got right there around the plastic plate where the plugs go in the wall when suddenly there was a huge -POP- and a giant blue flash that zipped up my arm and threw me against the refrigerator across the kitchen. People ran in to see what happened and I innocently told them what I was doing and their eyes all bugged out.

“THAT’S METAL AND WATER YOU PUT IN A LIVE SOCKET!”

What I did know was my right arm felt like it had been smashed with a baseball bat from fingers to shoulder.

I was banished to the couch that had just been brought in. I quietly smiled, grabbing Meghann and sitting on my side, nursing not only my baby, but my really hurting right arm.

We cleaned as best we could, the place looked normal again, but there were lingering smells we just couldn’t seem to get rid of.

One night, while I was sitting on the right side of the couch nursing Meghann, Tristan playing on the floor, their dad had had enough of the growing stink. I told him it smelled like rotting potatoes and maybe we accidentally left some in a box somewhere in the closet.

He set out to find the horrid stench and pulled the boxes out, throwing stuff wildly around the room. I yelled asking if he couldn’t please be neater? He did not answer. I just heard him as he went from room to room, under the bathroom sink, into the kitchen, under the cabinets… digging digging… and throwing things, many of which ended up on the hall floor.

He came up empty. Then looked at me menacingly.

“What?” I was still nursing Meghann.

I jumped up, Meghann  still attached and he pulled off the cushion I always sat on and there, on top of the mattress mechanism, was a rat. A dead rat.

A SQUISHED FLAT AS A PANCAKE DEAD RAT.

It had been under my ass! FOR MONTHS!

My former husband began laughing his head off. Reliving the rat’s last moments.

“I can see him! ‘Oh, some peanut butter and jelly leftovers!’ Then SQUISH, you flattened A LIVING RAT!”

He jumped around the room, doing the killing-the-rat routine half a dozen times.

Yeah. Me and my fat ass had killed a rat that had been 3 inches from my lap and my baby. I started crying which made him laugh even harder, telling me how funny it was.

Then he said he was going to get something to get the gross flat thing off our sofa. I begged him to throw the couch away. He refused, loudly reminding me we had no money for furniture and it was the only place I could nurse. He came out of the kitchen with Playtex yellow gloves on and a spatula. I could not watch.

He laughed and laughed as he scraped the disgusting animal off our couch’s pull out bed top, then danced outside to the dumpster and threw it all in.

The room still reeked and he looked in the kitchen, finding the Carpet Fresh. He came back and sprinkled the carpet fresh where the rat had been squished to death by my flopping-on-the-couch butt.

To this day, the smell of Carpet Fresh reminds me of that horrid stench. The smell that lingered until we were able to throw the couch away a year later.

As you can imagine, I hate rats. I can barely write it without shuddering with revulsion. Because of my rat-phobia, everyone in my life has agreed to call them “Potatoes.”

And damned if that flat rat didn’t smell like rotten potatoes. 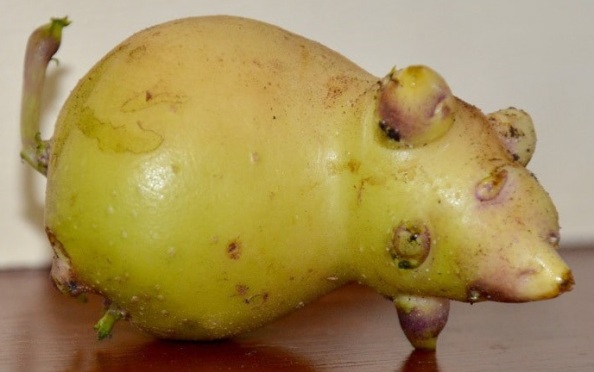 2 thoughts on “Potatoes in Tacoma”