It’s scary, spooky, blood-tinged and images of death and dying abound. All the reasons others love the holiday, I hate it.

When I was about 14, I saw The Exorcist in the movies (remember when there was no rating system except X?), my friends egging me on that I was a chicken shit and get over it. Even now, at 57, I wake with nightmares of Linda Blair’s head spinning and green vomit gushing out of her mouth.

I read Amityville Horror because everyone was reading it. I had to keep it covered with a dishcloth under the couch before I could go down the lonely hallway to my bed, lying there for an hour, terrified, before I stiffly fell asleep. 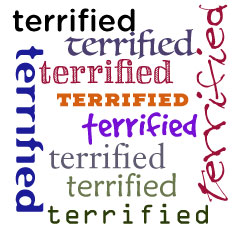 For the same peer pressure reasons, I rode scary rides at amusement parks and fairs. I am a Disneyphile and once had a vow to ride any ride Disney created because, “How bad could it be if Disney made it?” I’d waited eons before considering going on the Tower of Terror, a 13 story ride where the elevator drops, free-fall, over and over again, as people’s screams resonated throughout the park.

I was part of a worldwide Disney newsgroup and we would regularly meet in the parks. When one faction began taunting me that I would not go on the Tower of Terror, one of the guys said, “What do expect from a Democrat? They are all scaredy-cats.” Well, that was just the challenge I needed to get myself in line, shaking terribly and feeling like I was going to vomit the whole queue to the actual car that flies up and down. Once in and the bar went down, I screamed to get off, but it was already too late; the ride had begun.

The huge “elevator” car, carrying 22 people, slowly wended its way through the storyline before clicking into place to go up the 13 floors. It seemed to climb forever upward. (I thought about Charlie in the Chocolate Factory flying out the top in the glass elevator.) Then, once at the top, it goes into a complete free-fall, down several stories, stops, climbs again, only to drop a different number of floors. Over and over until eternity passed and I was finally able to escape the Republican friends who congratulated me on my bravery.

I began to faint and two people led me to a side corridor, still by the ride’s car, and I sat on the floor, head between my knees, shaking so hard my teeth chattered. I could not get up for 30 minutes. I had several visitors while scrunched on the floor including paramedics who wanted me to go to the hospital for a check-up. I declined.

While I sat there, I resolved to never do anything scary again. No ride. No movie. No book. I would never put myself through that stress again. If I go to a movie and it gets scary, I leave right away and go to a rated G film in the movie complex. 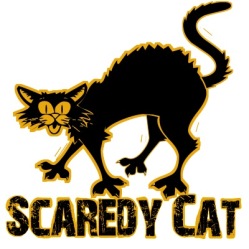 This has extended to finishing books or movies I do not like. It also melded into what I watch on television, mainly the news.  I figured I was old now and deserved to enjoy what I was reading, watching or listening to. So, if I do not like something, I move on to the next option, releasing the intense urge to complete the task, as I was taught to do growing up.

2 thoughts on “Being Scared”